“Choosing the right photographer to shoot an assignment means two things: to understand the picture style of the magazine or newspaper and to know which photographer is the best for this assignment. For me, working with a photographer on stories, discussing the topic and trying to get the best out of it, was always the most rewarding part of my job” 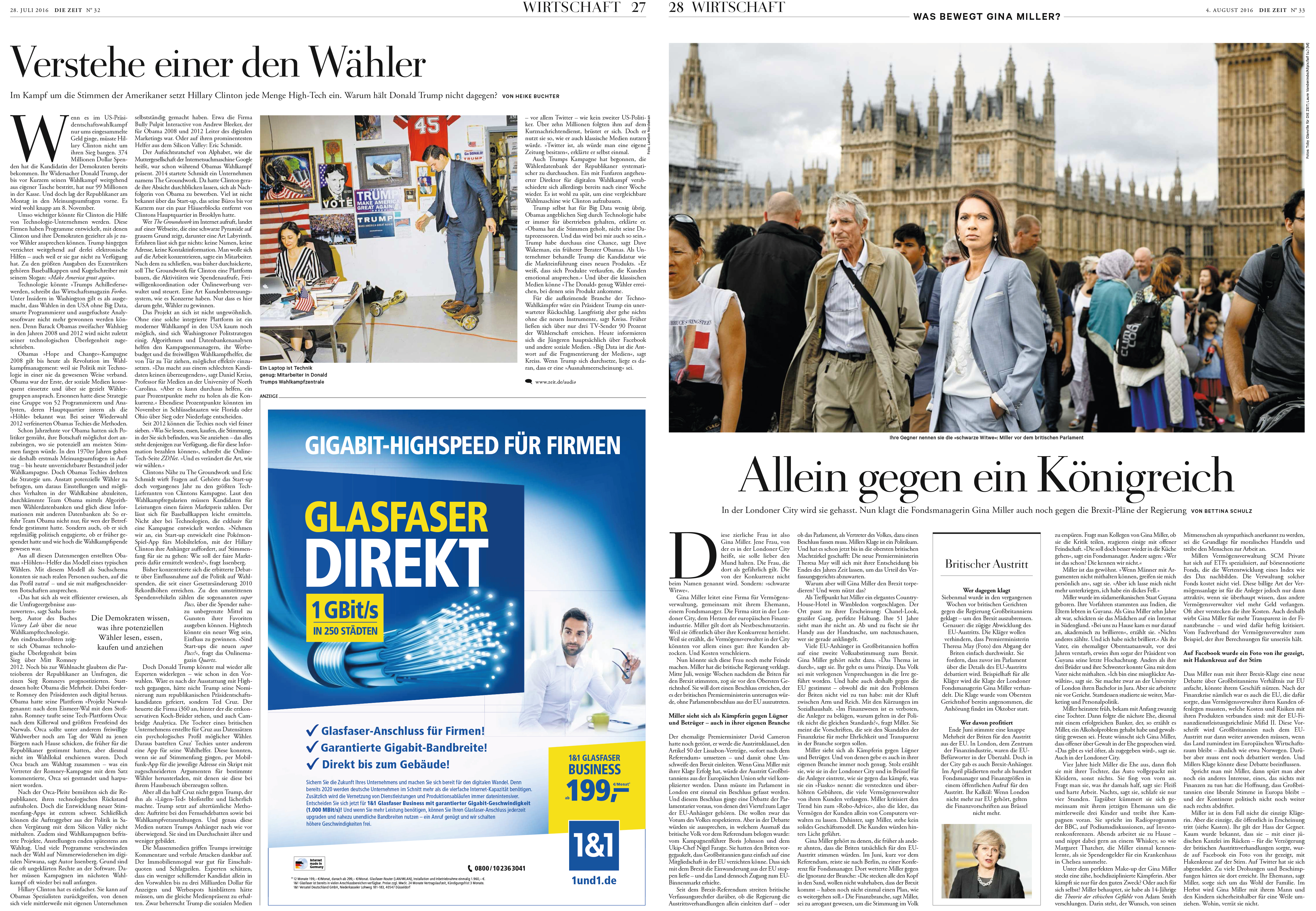 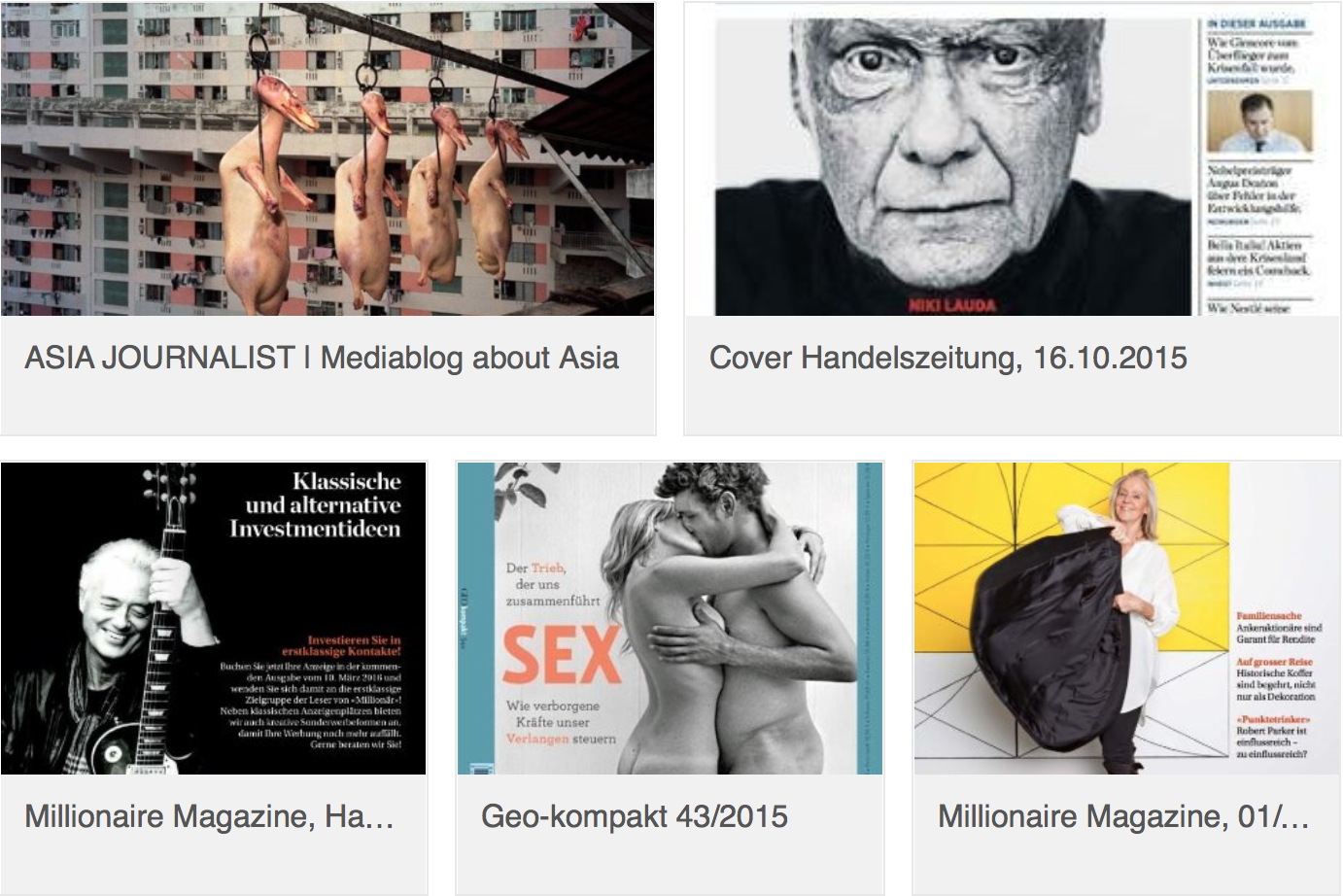 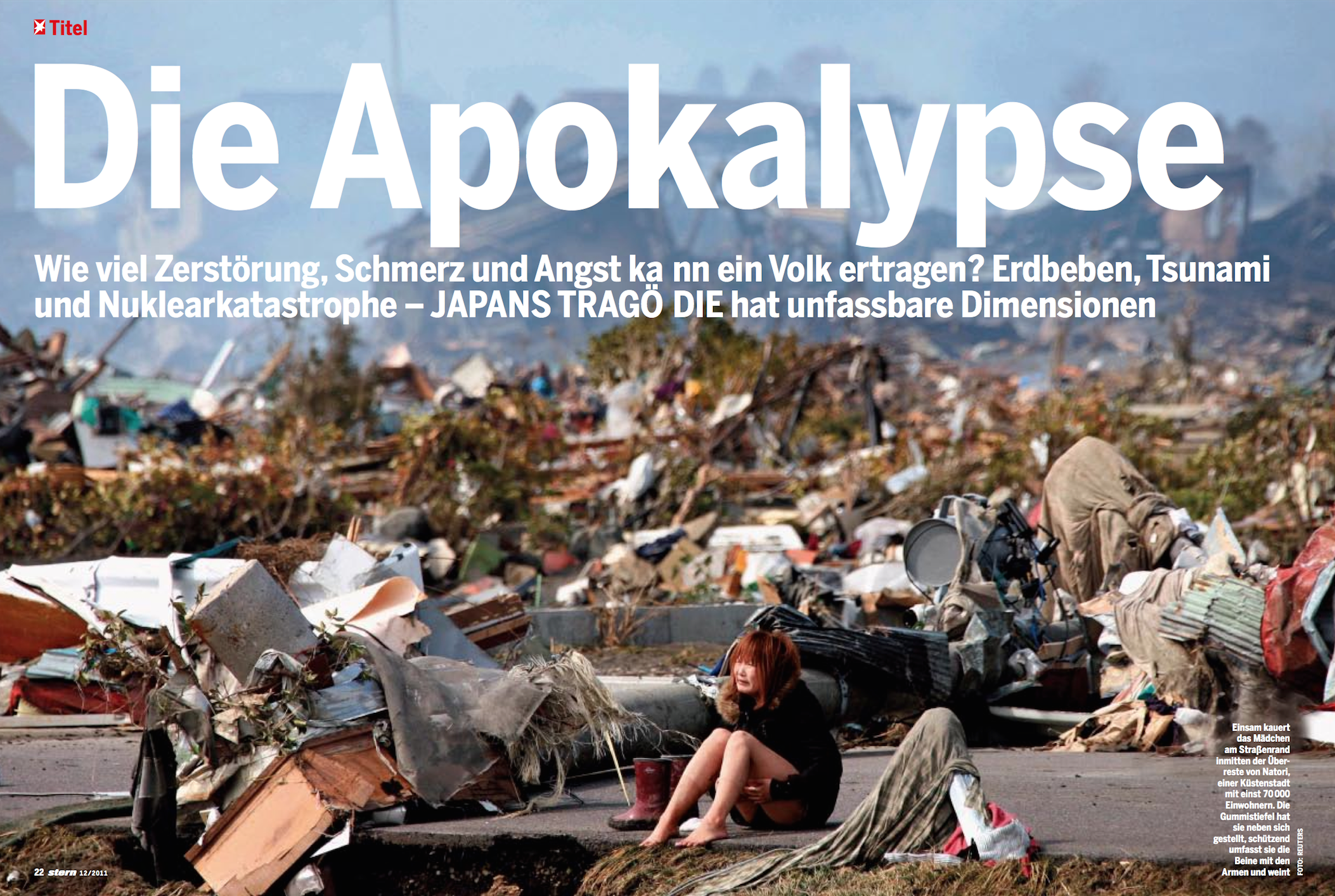 “The apocalypse”, stern 12/2011, (PDF)
How much destruction, pain and anger can a nation bear? Earthquake, tsunami and nuclear catastrophe – Japans tragedy has incredible dimensions.
Photo: Reuters 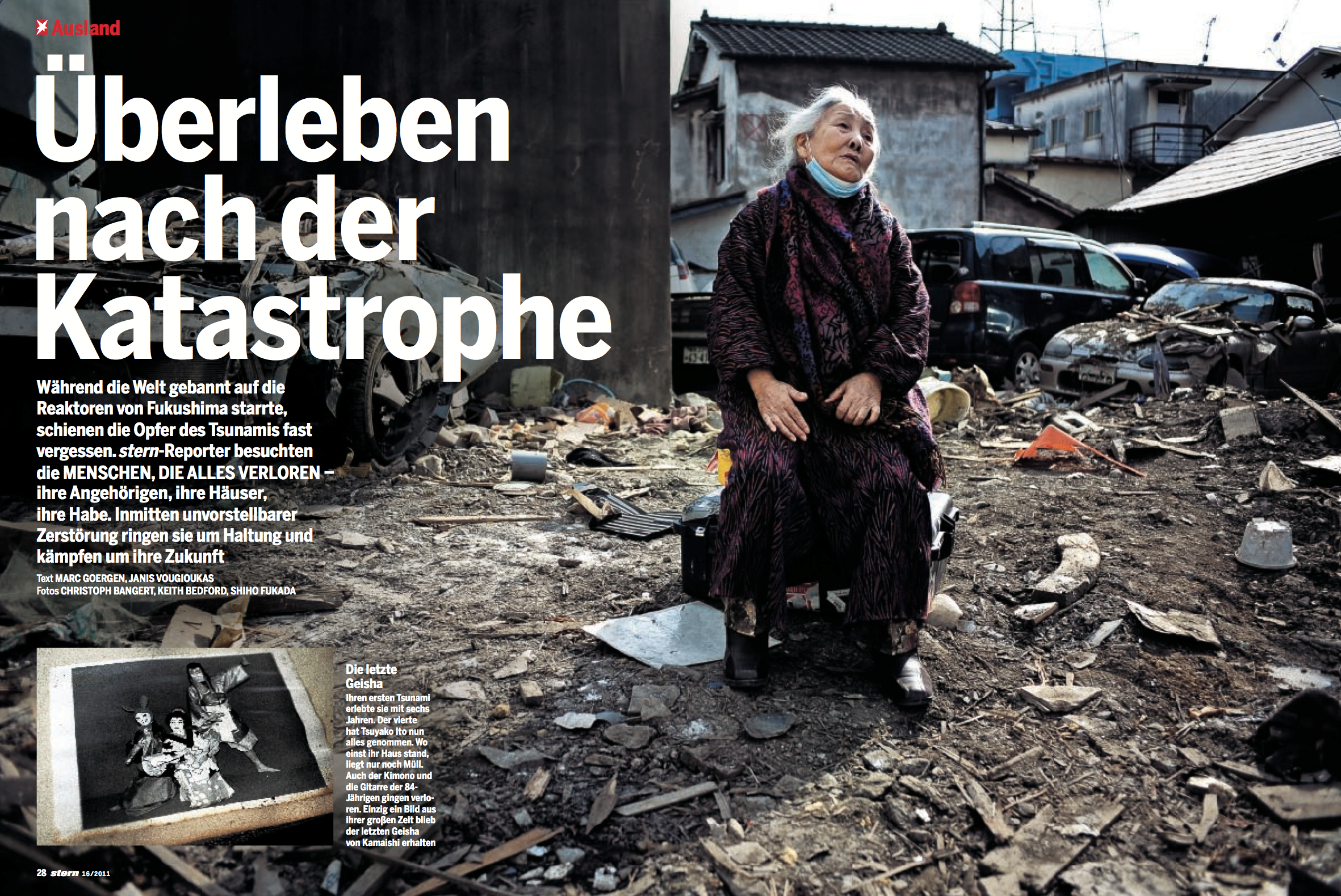 “Survival after the catastrophe”, stern16/2011, (PDF)
As the world was peering banished at the reactors in Fukushima, the victims seem to be forgotten. stern-reporters interviewed people, who have lost everything – their relatives, houses and belongings. Admidst unimaginable destruction, they struggle and fight for their future.
Photo: Keith Bedford 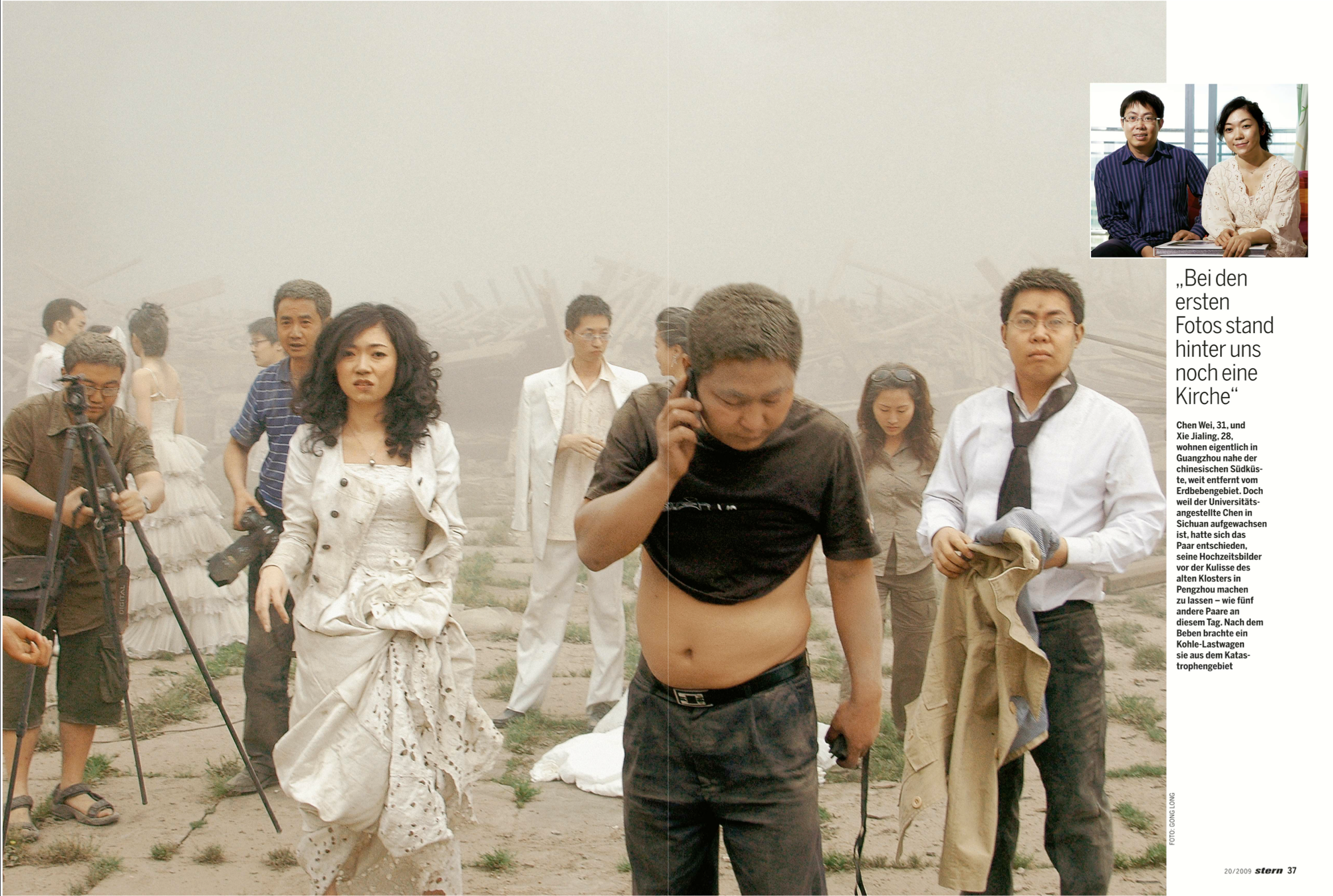 ” The quake goes on”, stern 10/2009, (PDF)
It was one of the worst natural catastrophes in Chinas history, the earthquake in Sichuan has changed China more than the Olympic Games. stern traced survivors one year later, whose pictures shattered the world.
Photo: Boris Austin 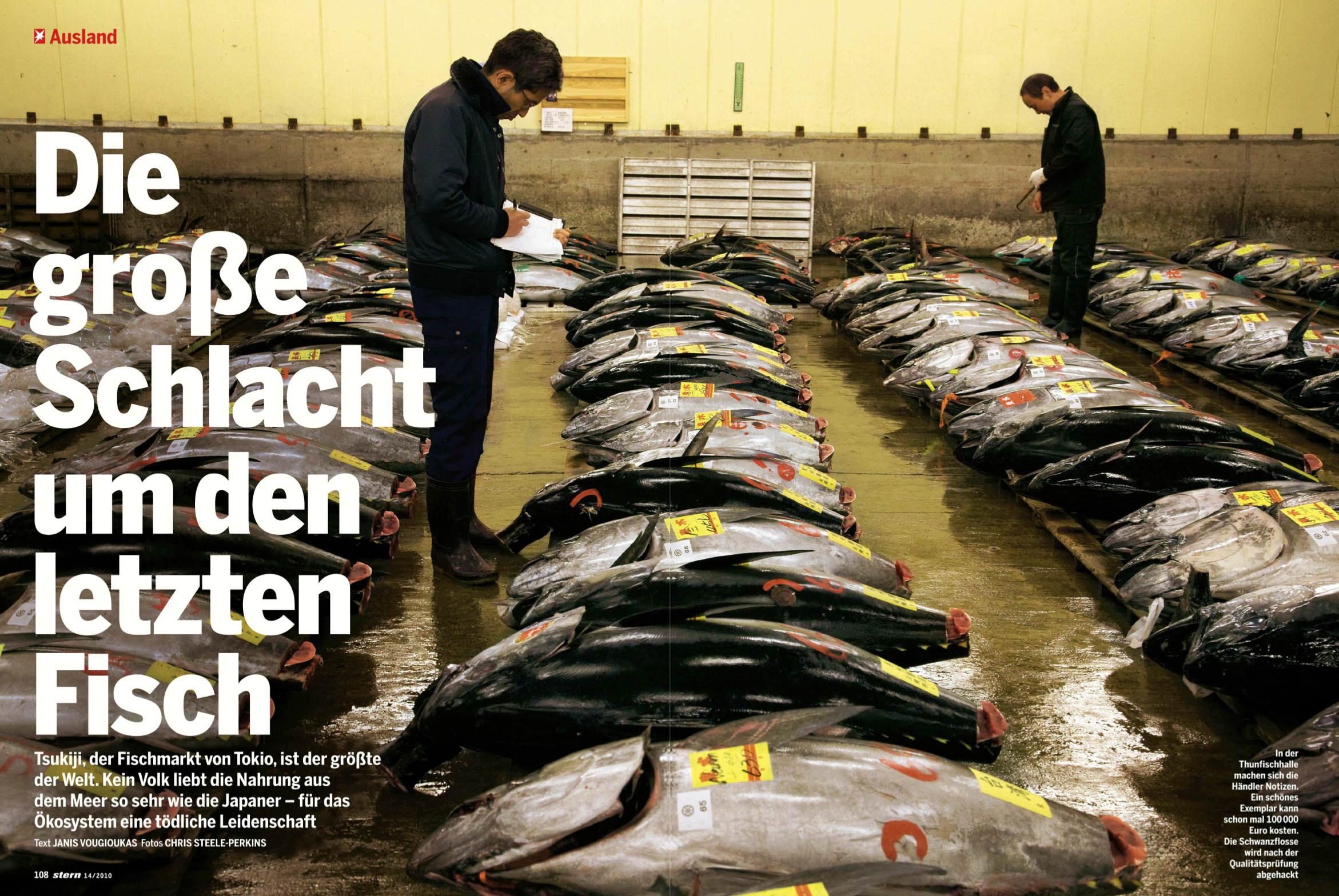 “A life dedicated to freedom”, stern 25/2012, (PDF)
Her destiny touches the world. She was under arrest, suppressed, haunted. With her smile she vanquished the generals in her home country Myanmar. On saturday, she can finally accept the Piece-Nobel-Prize, which was given to her 21 years ago.
Photo: Simon Daniel/Getty Images

“The quit revolt”, stern 51/2010, (PDF)
Some are old and were powerful, others have suffered their whole life under despotism. After the Piece-Nobel-Prize went to Liu Xiaobo, there is a gradually forming a civil rights movement in China against oppression and autocratic leaders of the communist party. 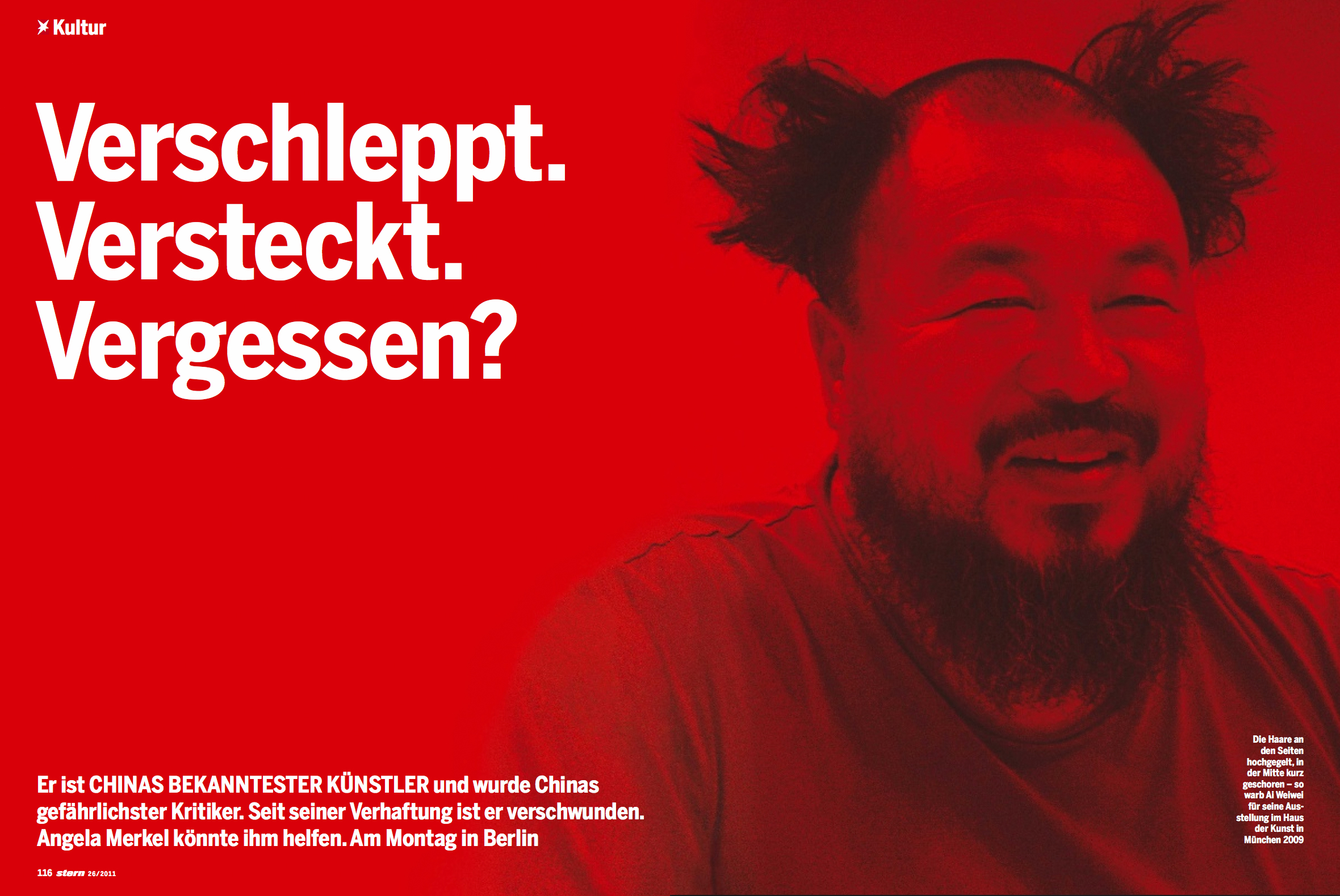 “Where is Ai Weiwei”, stern 26/2011, (PDF)
“It can happen any day. When it does, I would be most afraid of the daily simple things such as if it is possible to shower in prison. Sometimes I cannot sleep in hotels because of the soft cushion. Are there any cushions in prison” – Ai Weiwei was expecting something like that when stern met him last in October 2010. Now it has been reality, he was not seen since the beginning of April 2011. The police took him to a hidden place, without any accusation, no lawyer and no contact to his family. Angela Merkel could help him, on monday, when China`s communist party leader Wen Jiabao comes to visit Berlin. 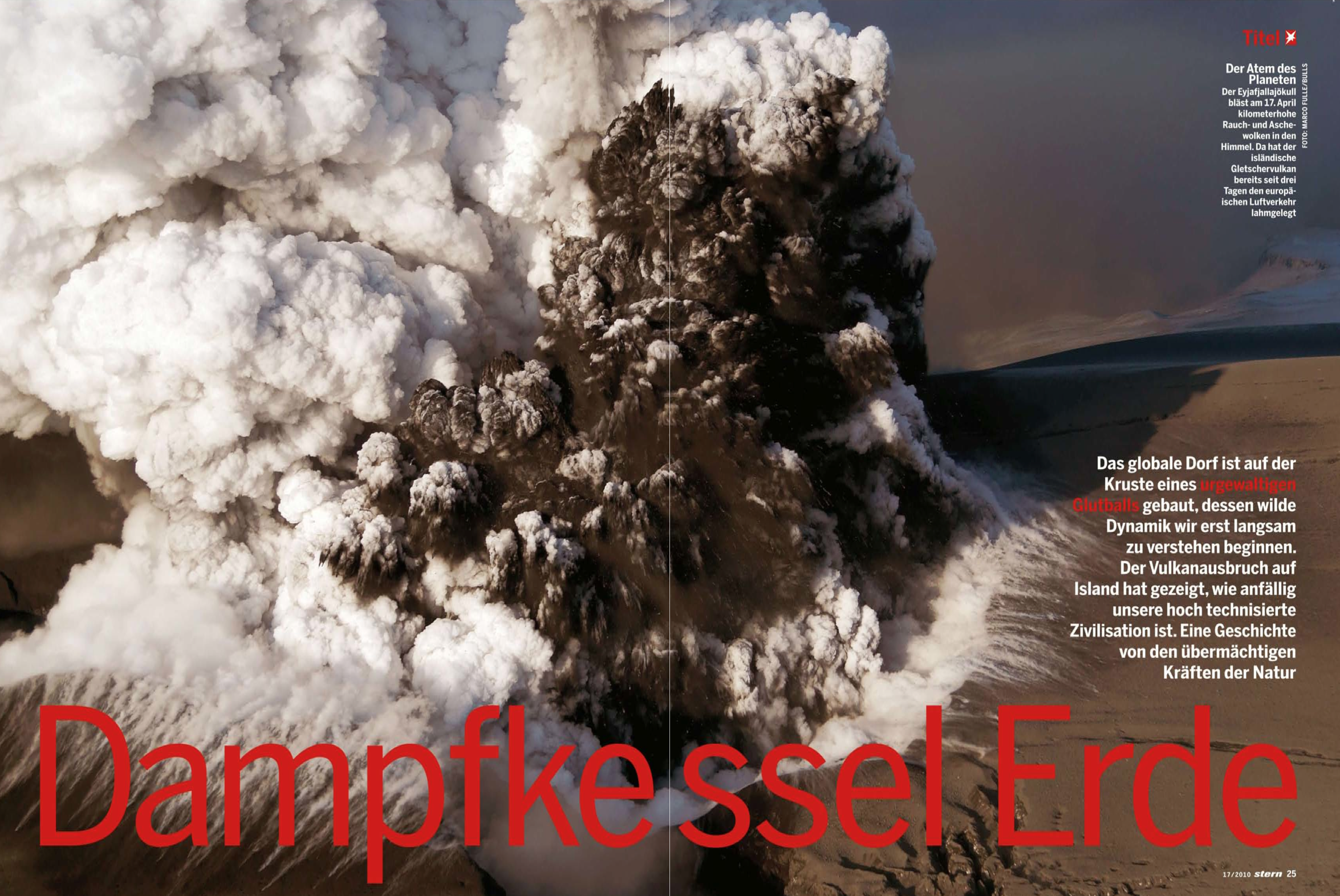 “Steam boiler earth”, stern 17/2010, (PDF)
The volcanic eruption on Island shows how fragile our high-tech civilization is. A story about the overpowering forces of nature.
Photo: Marco Fulle/Bulls 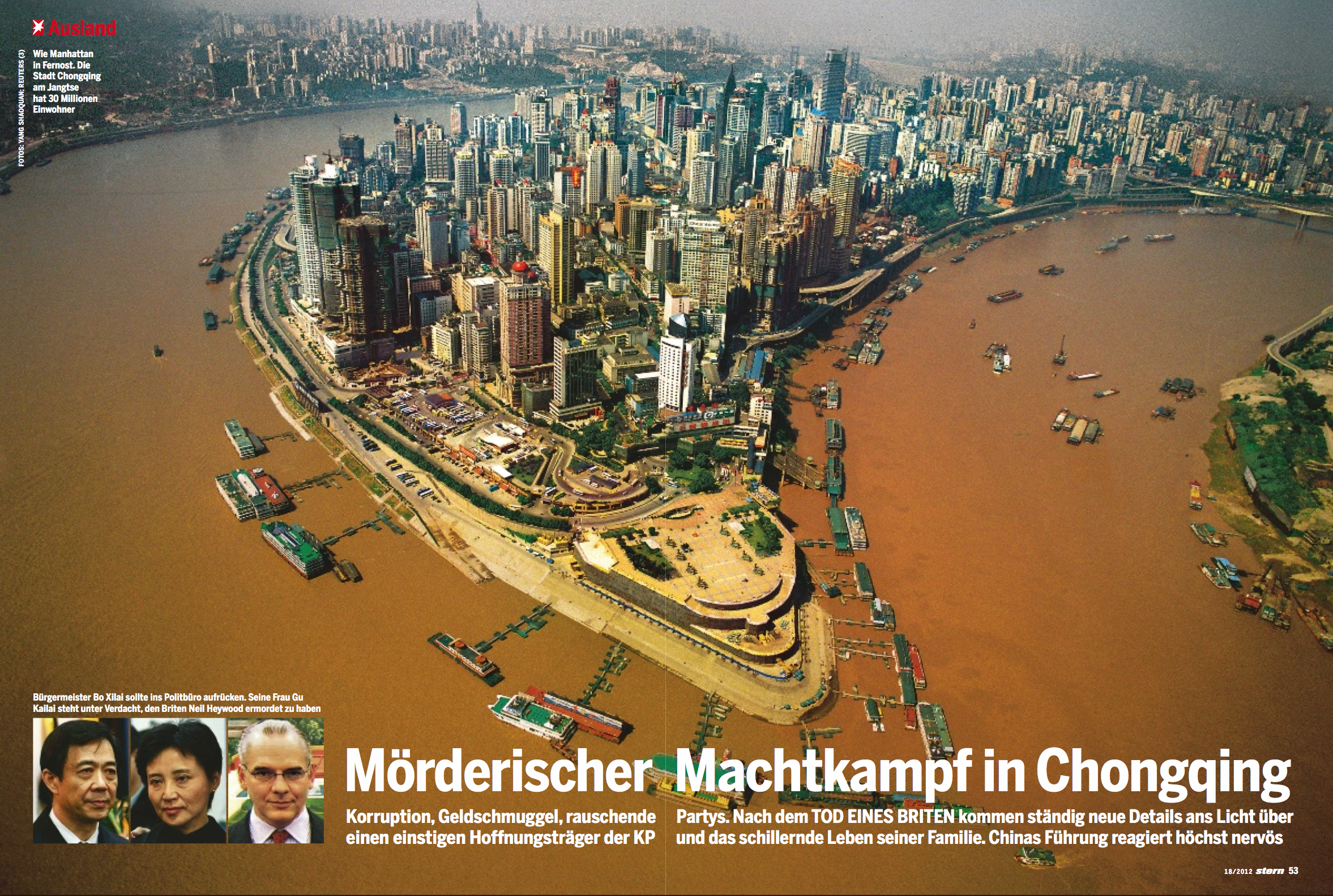 “Deathful struggle for power in Chongqing”, stern 18/2012, (PDF)
Corruption, organized smuggling, glamorous partys. After the death of a Brit, more and more details are revealed about Bo Xilai, who was once a ray of hope for the communist party in China.
Photos: Yang Shaoquan, Reuters (3) 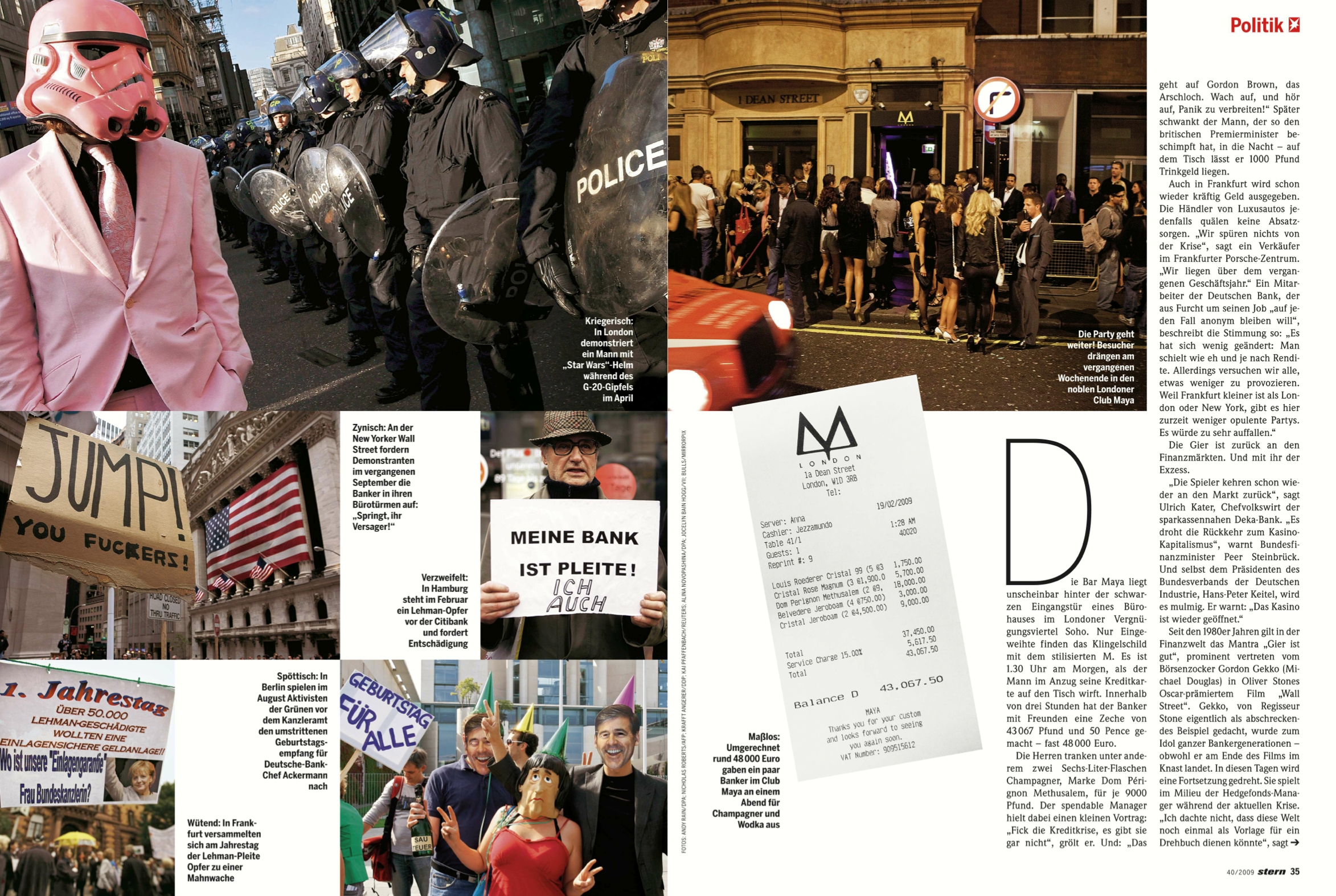 “The heir to the throne”, stern 46/2012, (PDF)
At the end of next week, Xi Jinping is expected to be named as the leader of the Chinese Communist Party. He is a politician wo has got what it takes to become a big reformer.
Photo: Larry Downing/Reuters 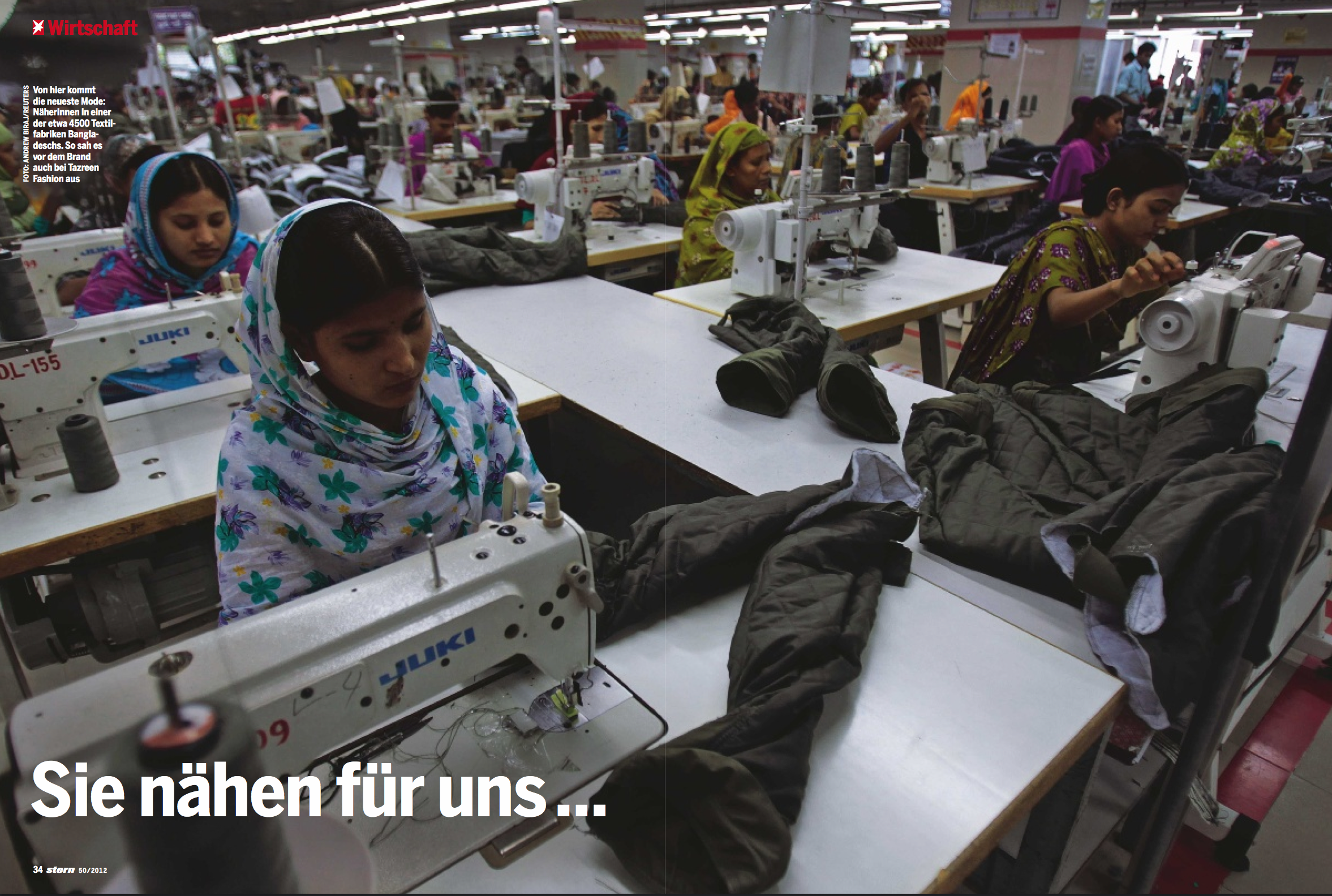 “They stitch for us…”, stern 50/2012, (PDF)
The fire disaster in Bangladesh shows, how inhuman the fashion industry is producing their goods. We are all responsible for this catastrophe – the companies, the politics and the consumers.
Photo: GMB Akash 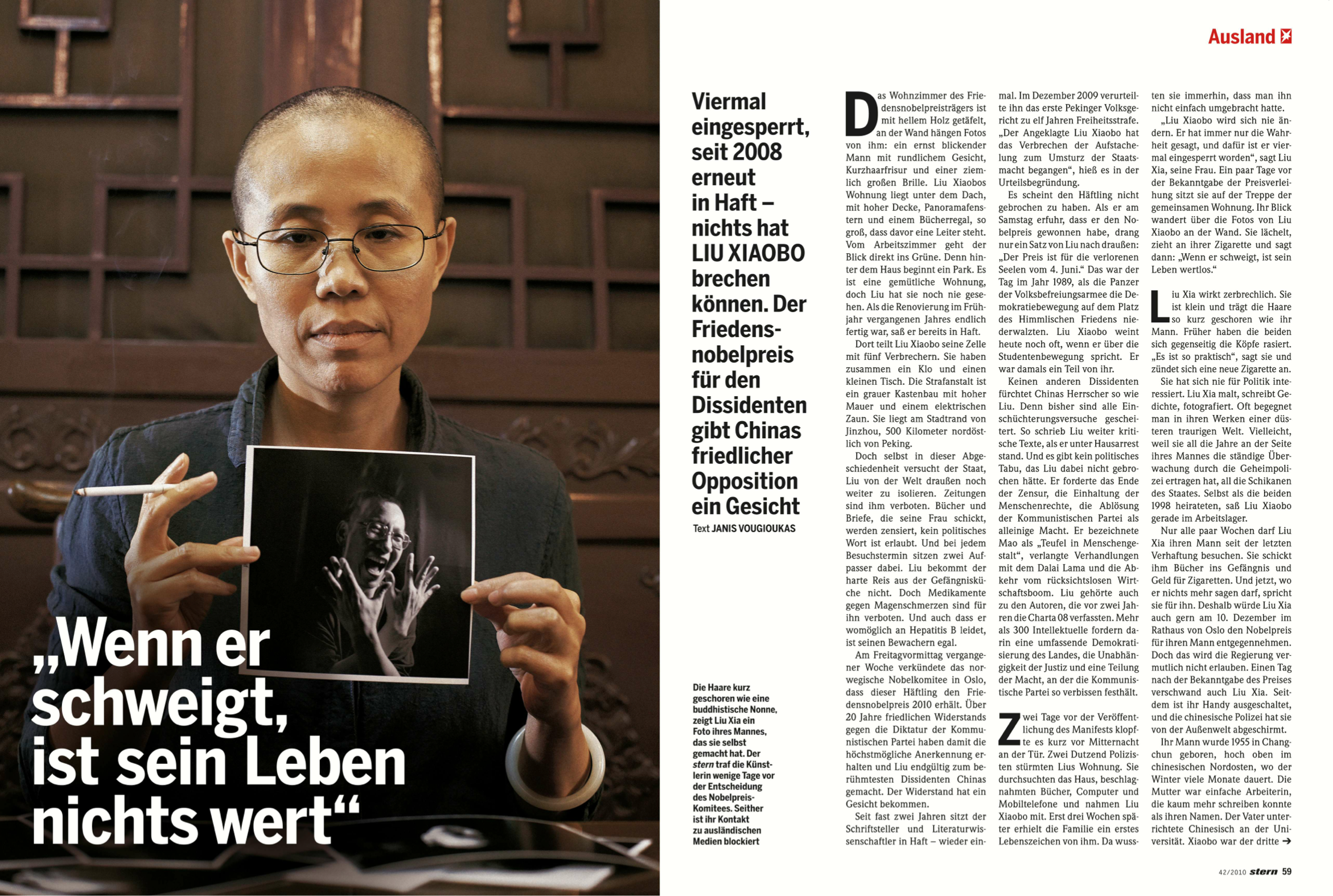 “When he is silent, his life is not worth a penny”, stern 42/2010, (PDF)
Four times imprisoned, since 2008 in jail – nothing could break his spirit. The Piece-Nobel-Prize for Liu Xiaobo gives the opposition in China a face.
Photo: stern 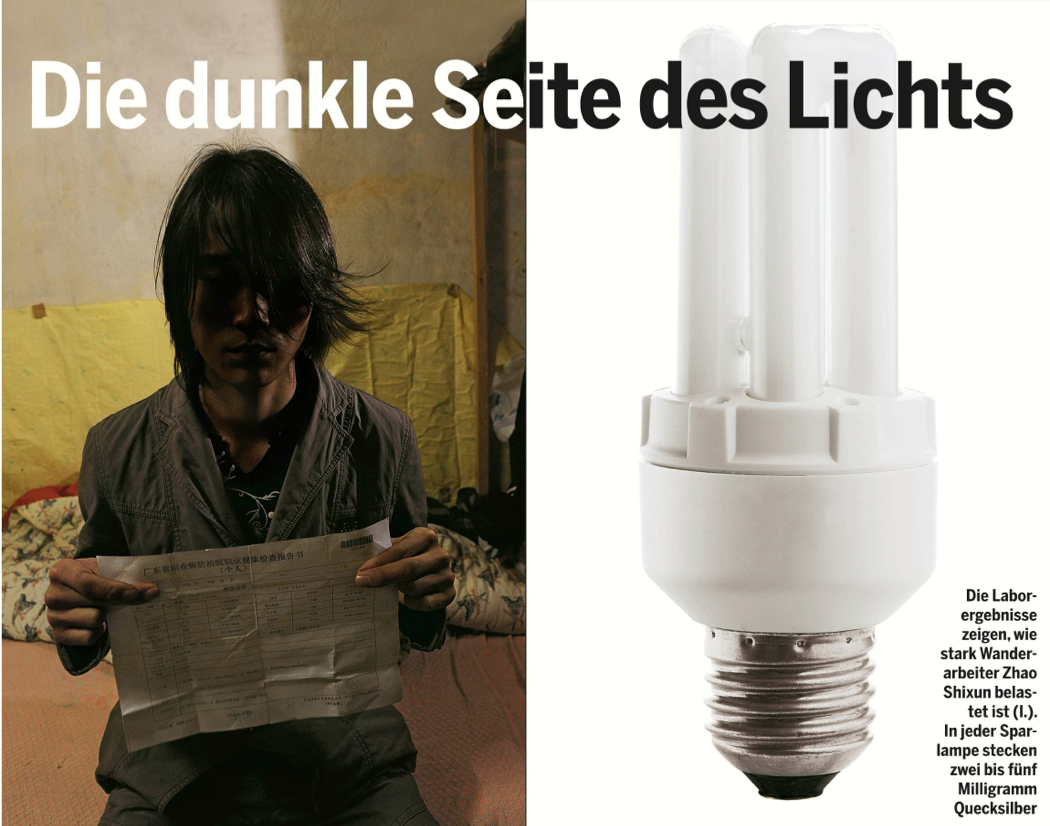 “The dark side of the light”, stern 13/2010, (PDF)
Reportage about the decision of the European Union to ban filament light bulbs across all 27 member states, which wastes 90 percent of its energy use as heat, not light. On the contrary, an ordinary energy-saving bulb contains five milligrammes of mercury – just enough to cover the tip of a ball-point pen, but capable of polluting 1,800 tonnes of groundwater. Also, thousands of Chinese factory workers who manufacture ‘environmentally friendly’ mercury compact fluorescent light bulbs (CFLs) for export to first world countries have been poisoned and hospitalized because of mercury exposure over the last decade.
Photos: Richard Jones 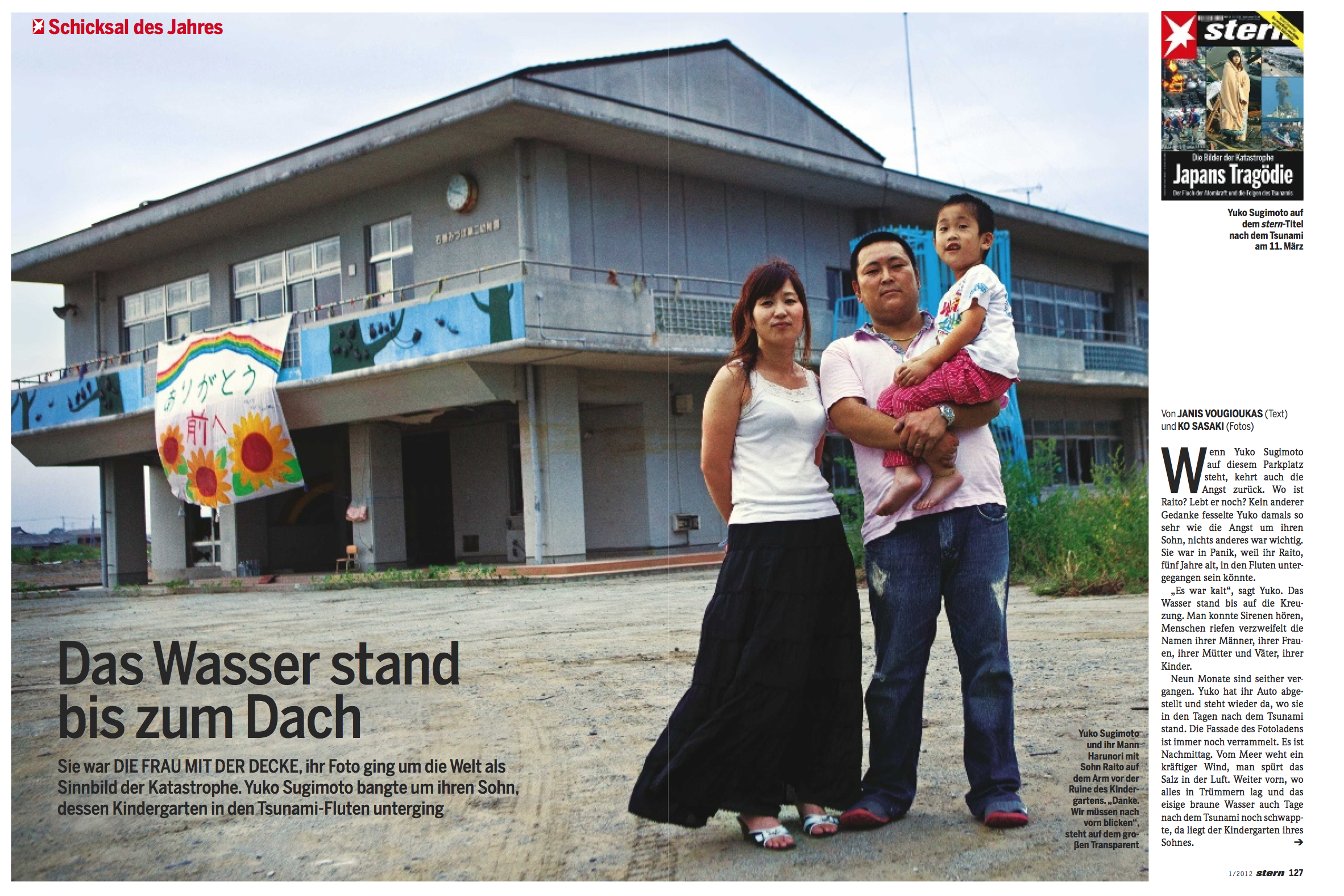 “The water was up to the roof…”, stern 1/2012, (PDF)
She was the woman with the blanket, her photos went around the world as a symbol of the catastrophe in Fukushima. Yuko Sugimoto was stricken with fear, whose kindergarten was flooded.
Photo: Ko Sasaki 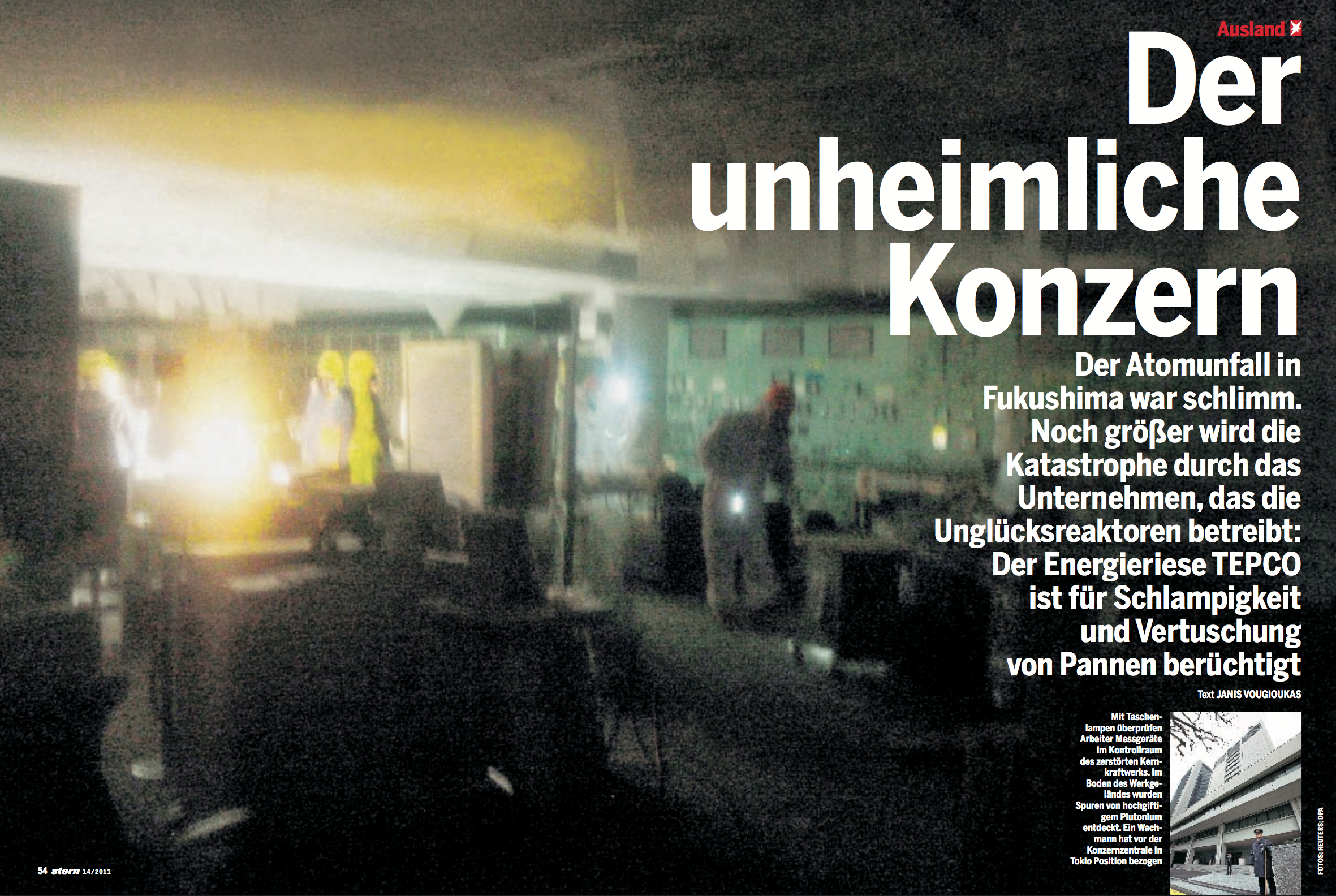 “The scary company”, stern 14/2011, (PDF)
The nuclear accident in Fukushima was catastrophe – but it gets even worse through the company which operates the reactors: TEPCO is notorious for its negligence and the cover up of breakdowns.
Photos: Reuters, DPA 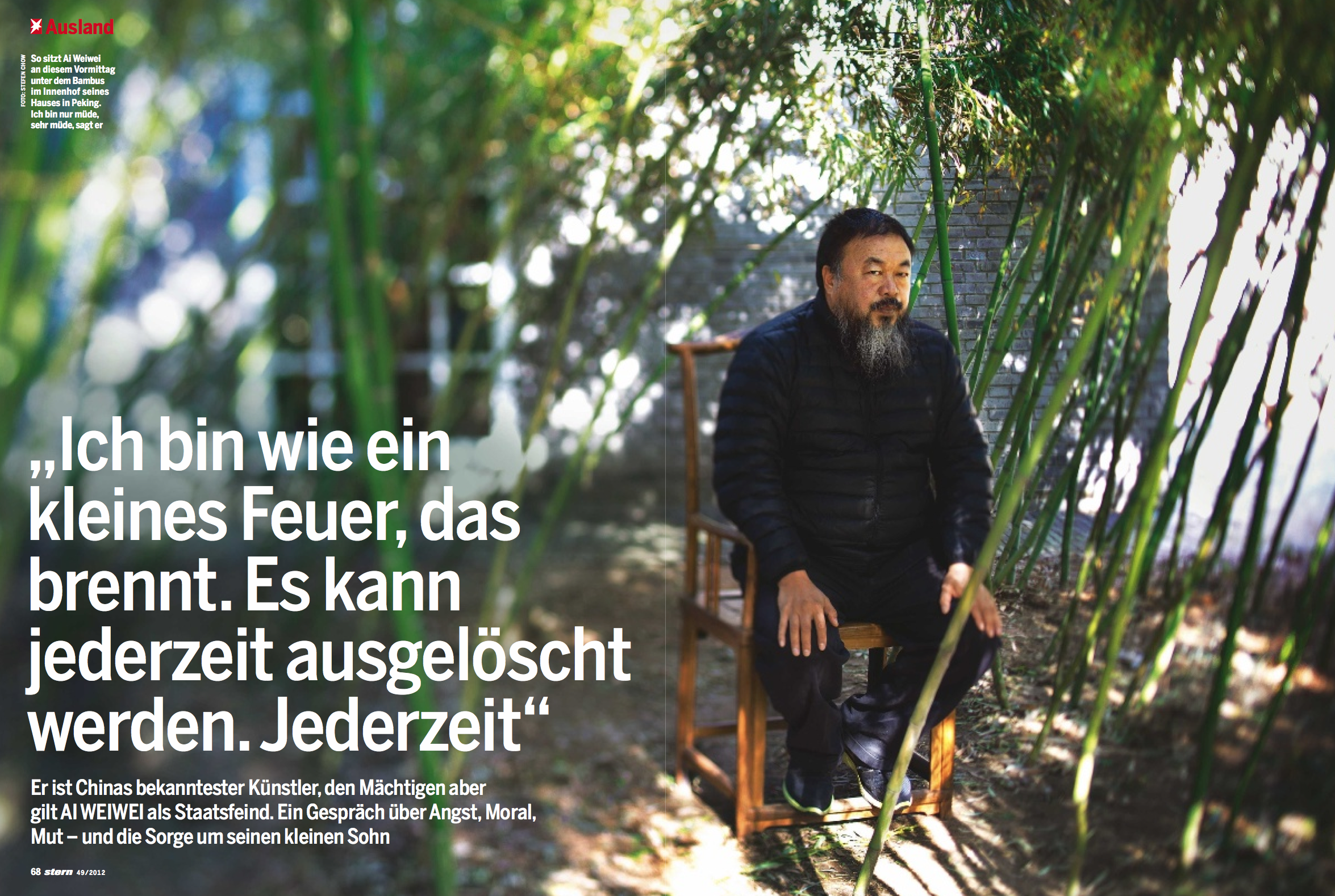 Interview with Ai Weiwei, stern 49/2012, (PDF)
Just before Xi Jinping was named as the new head of the Chinese Communist Party at the 18th congress in November 2012, stern met the artist Ai Weiwei in his house in Beijing for an interview to discuss the political situation in China and his life under observation.
Photos: Stefen Chow 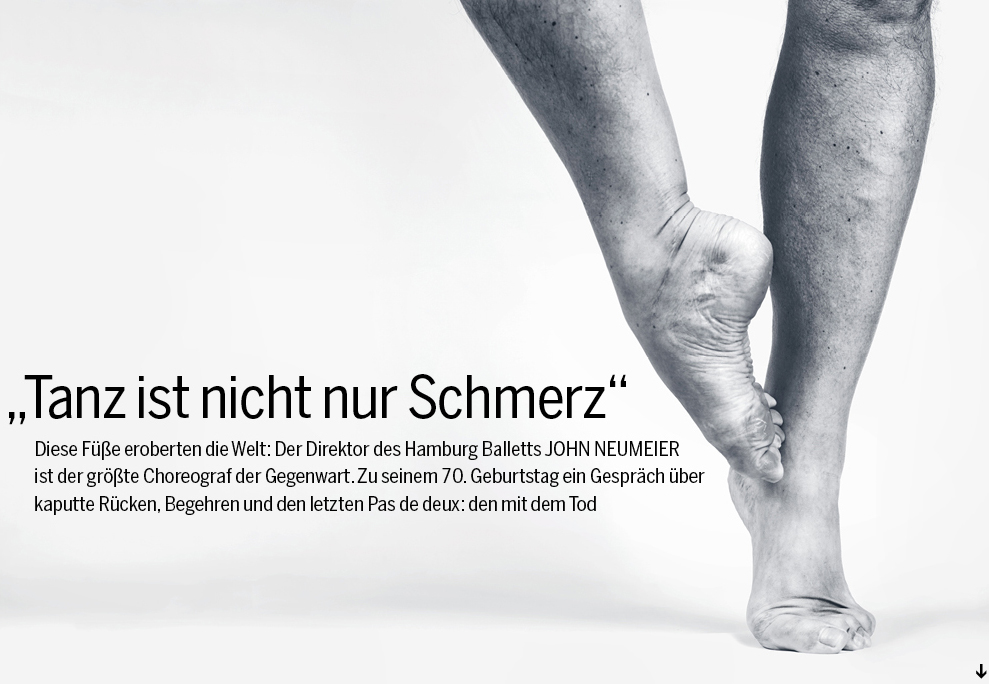 ” Ballet is not only pain”, stern 9/2012, (PDF)
These feet took the world by storm: The Hamburg ballet director John Neumeier is the greatest contemporary choreographer. Now turning seventy, he speaks about back pain, desires and the last Pas de deux: the one with death.
Photo: Grischa Rüschendorf

“Words – sharp like a sword”, stern, 41/2009, (PDF)
China is host country at the Frankfurt book fare but a lot of critical writers are haunted, arrested and abused – and are not allowed to visit Germany for the fare.
Photos: Marl Leong (2), Philip Gostelow/Anzenberger, Reuters, AP 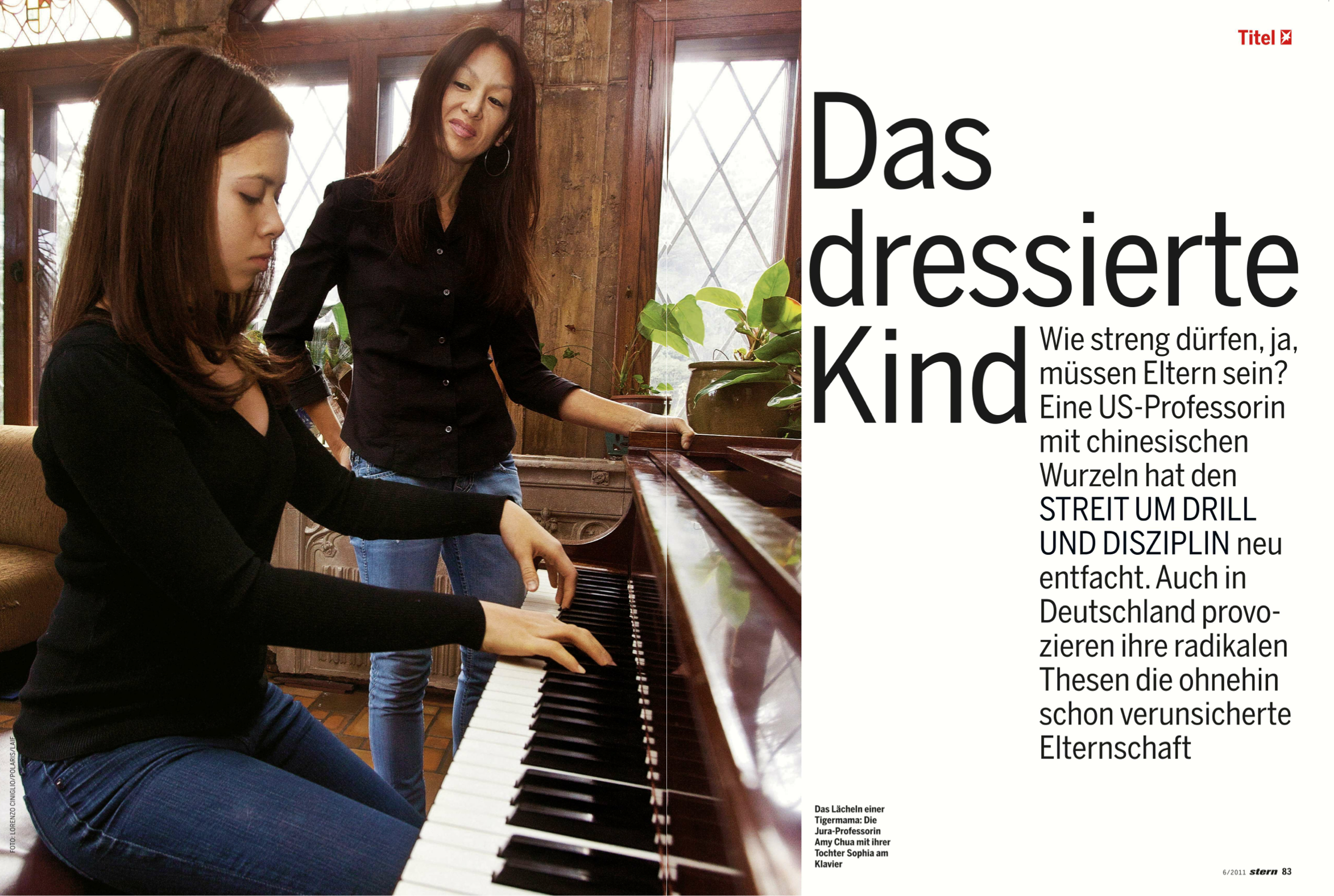 “The trained child”, stern 6/2011, (PDF)
How strict have or must parents be with their kids? A female US-professor with Chinese background has newly triggered disputes about drill and discipline with children. Her radical thesis is provoking already uncertain parents in Germany.
Photo: Lorenzo Ciniglio/LAIF/Polaris 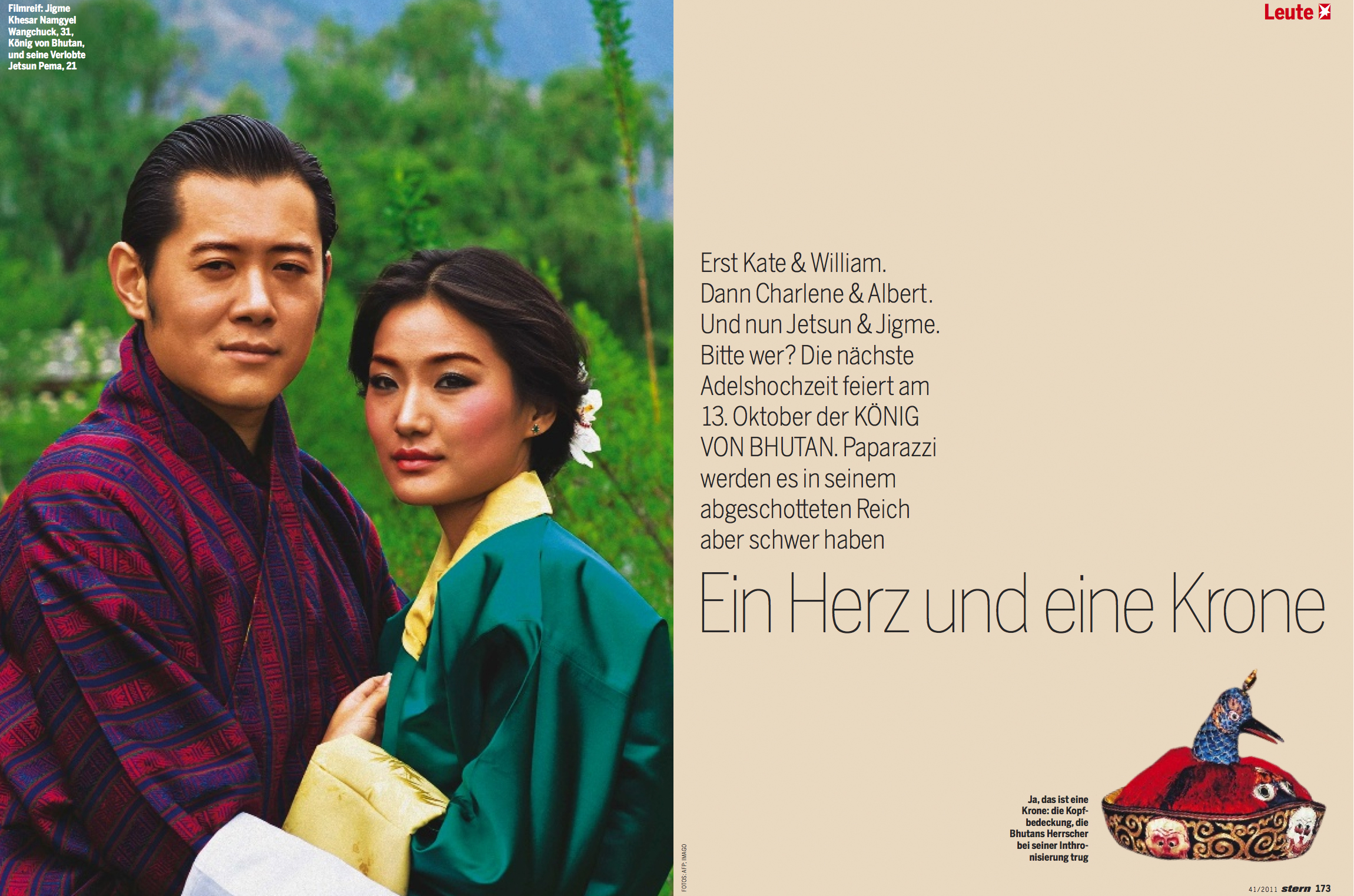 “Heart and crown”, stern 41/2011, (PDF)
First Kate and Williams, then Charlene and Albert. And now Jetsun and Jigme, pardon, who? The next noble marriage will be celebrated on October 13 in Bhutan. But for paparazzi’s it will be hard to shoot some exclusive photos this time.
Photo: AFP 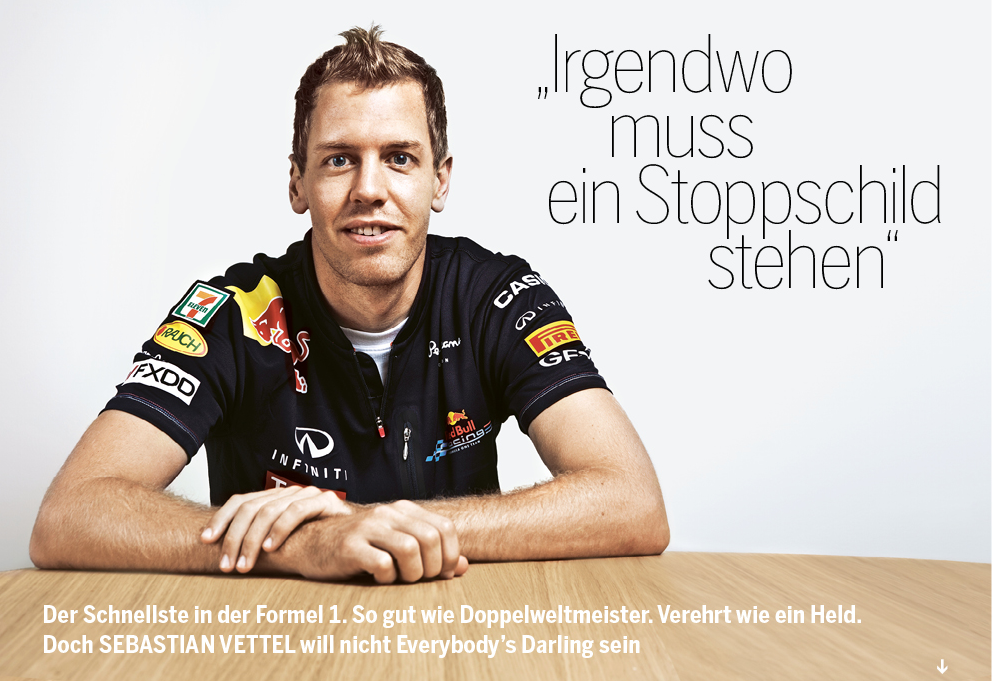 “The new drugs”, stern 43/2011, (PDF)
A new kind of drug business makes it hard for investigators and legal authorities to track down as synthetic drug producers change the composition for the ingredients very quickly. That means good business for the drug traders but incalculable risks for the consumers. 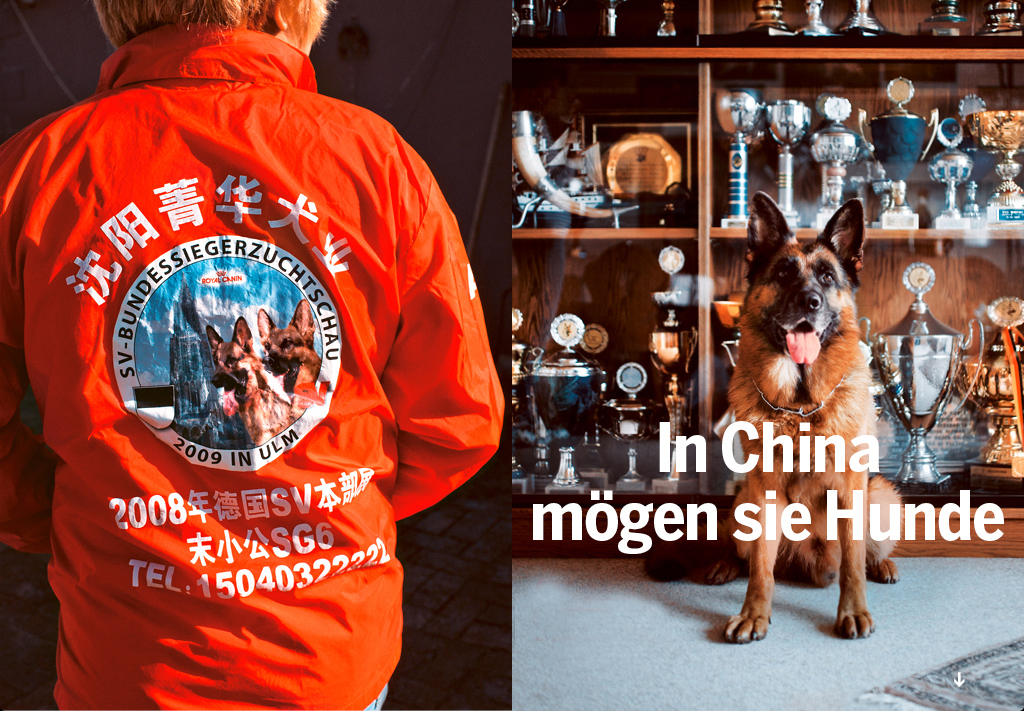 “In China they love dogs”, stern 5/2012, (PDF)
More and more Chinese love German shepherds and spent a fortune on them – up to 160.000 Euro for a rewarded breeding dog. But they don’t get any guarantee from the German breeders – if they die on their way back to China, the money is gone. But it is still a big business for the Chinese, they sell the dogs with a 30 % surcharge in China.
Photo: David Hogsholt 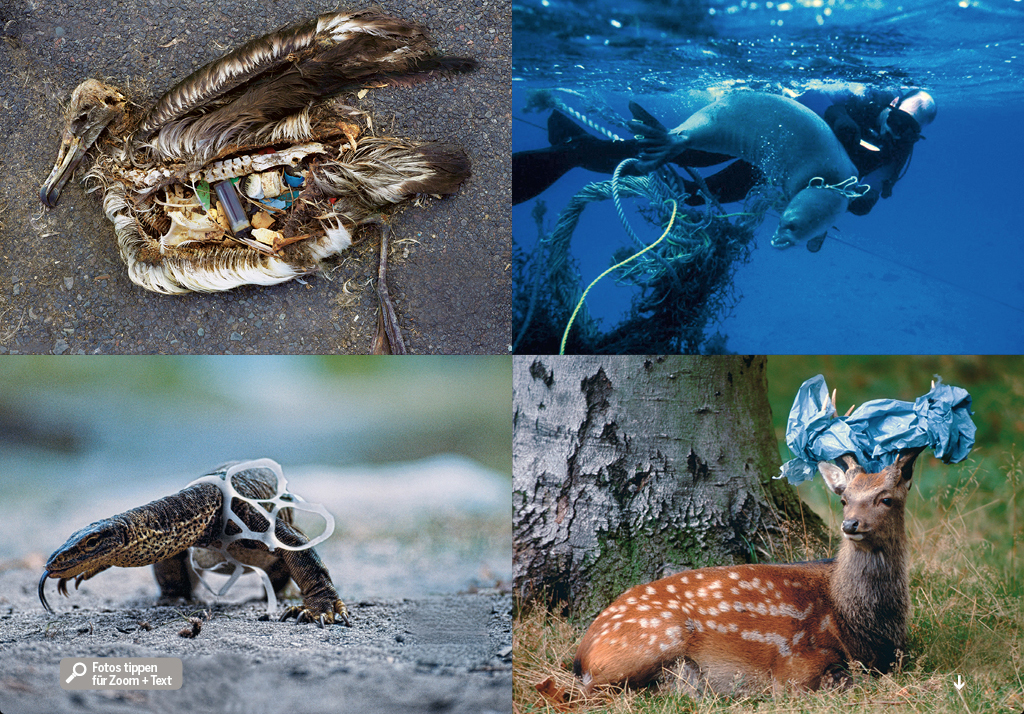 “Garbage”, stern 50/2011, (PDF)
The earth is turning into a bin, garbage of seven billion people wells out of every corner. Only radical changes in the production of goods and the behavior of the consumers can ease the problem.
Photo: Chris Jordan 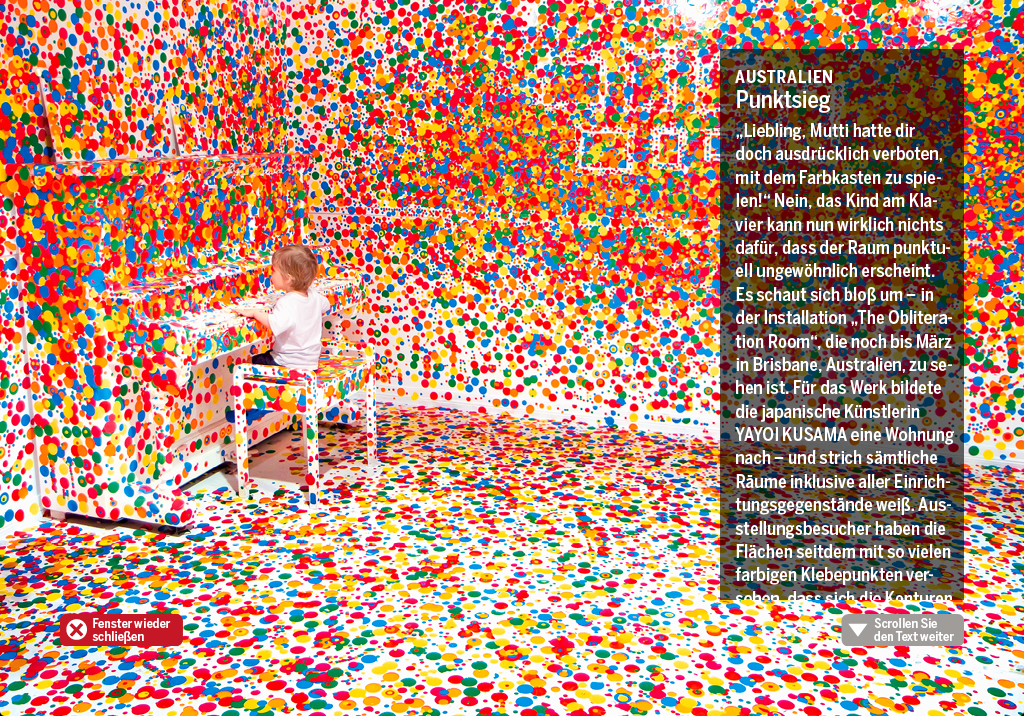 “Points win”, stern, 3/2012
“The Obliteration room” is an installation in Brisbane, Australia from the Japanese artist Yayoi Kusama. She painted a whole room including everything in it in white and then asked the people to place a colored dot somewhere.
Photo: Stuart Adelse/Caters News 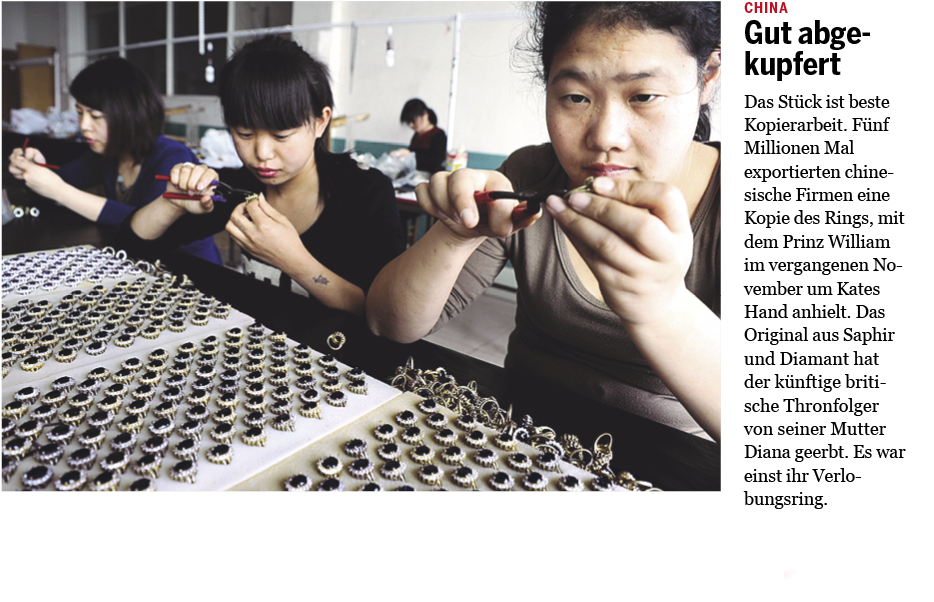 “Well copied”, stern, 19/2011
Around 5 million copies of the engagement ring given to Kate Middleton by her fiancé, Prince William, were produced in Chinese companies. It belonged to his mother, Princess Diana. The ring is the stunning 18 carat blue sapphire and diamond ring his father, the Prince of Wales, gave his mother in February of 1981.
Photo: Zhang Jiancheng 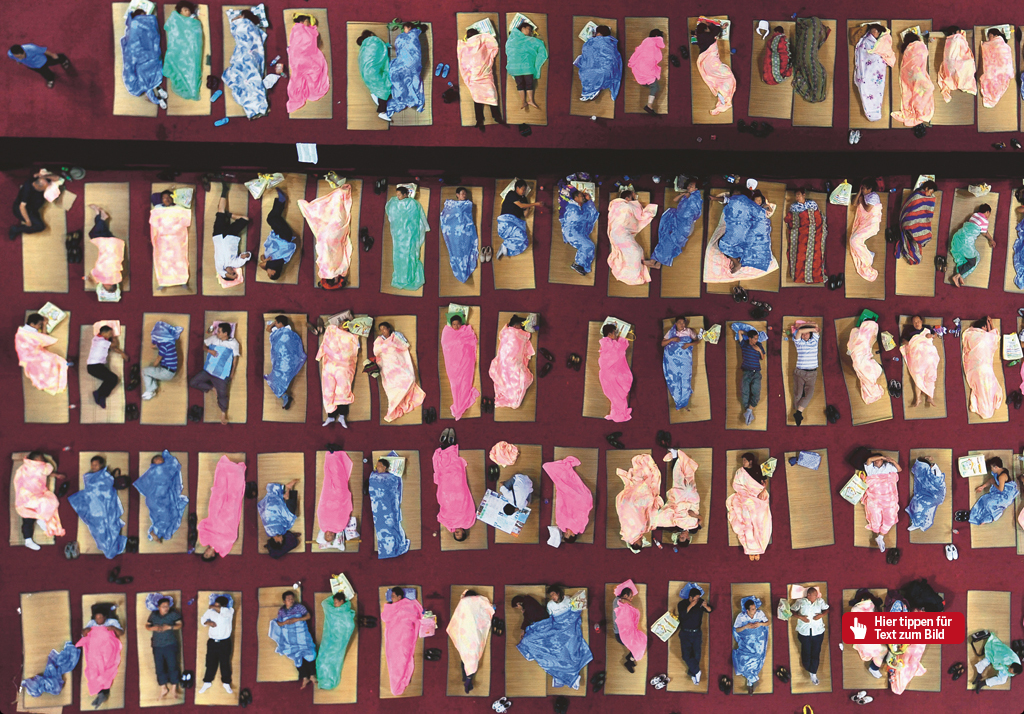 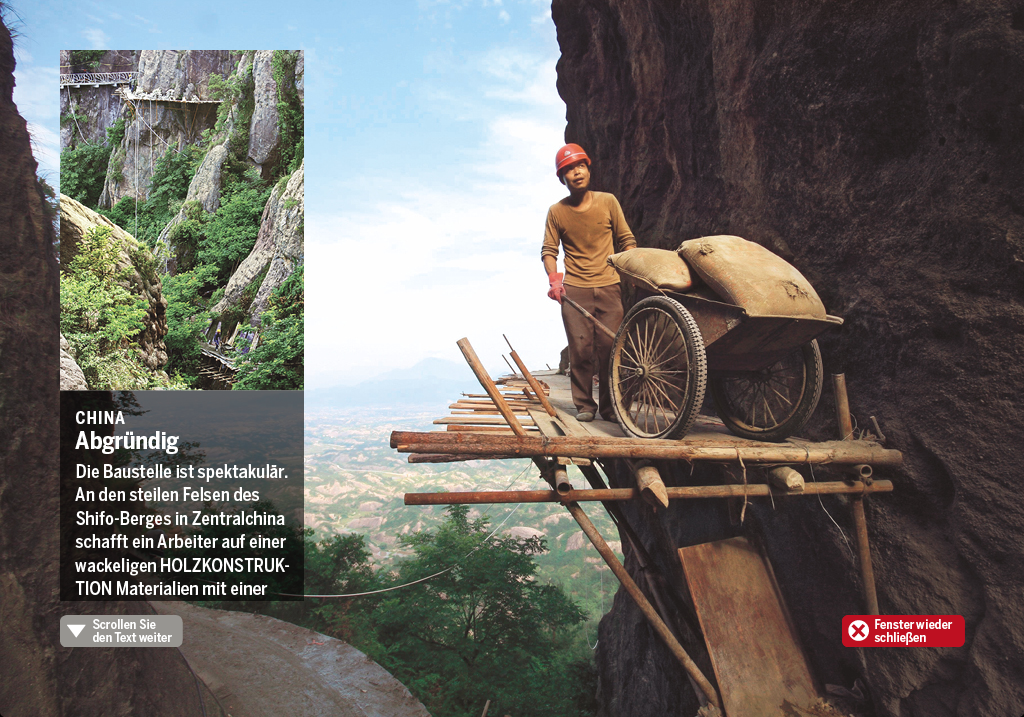 “Unfathomable”, stern 27/2011
This construction site is spectacular. A worker is carrying material on a wonky wood construction in the heights of the Shifo-rocks in China.
Photo: Imaginechina 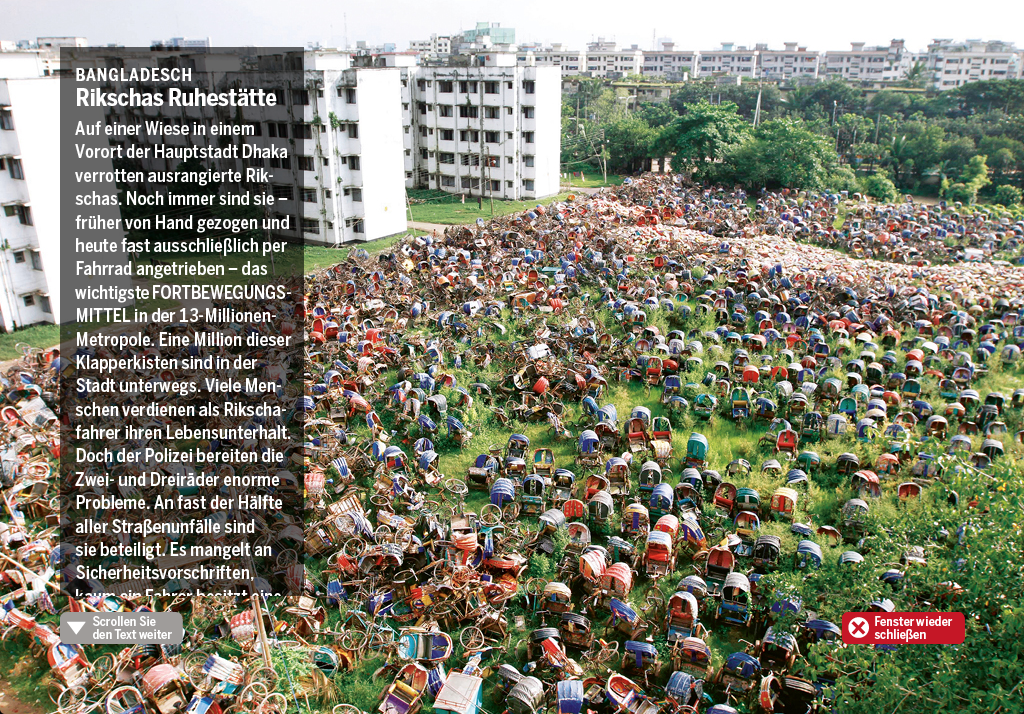 “Final resting place”, stern 42/2011
On a ground in the suburbs of Dhaka, discarded rickshas are rotting. Up to now, rickshas are the most important means of transport in the capital of Bangladesh.
Photo: Andrew Biray 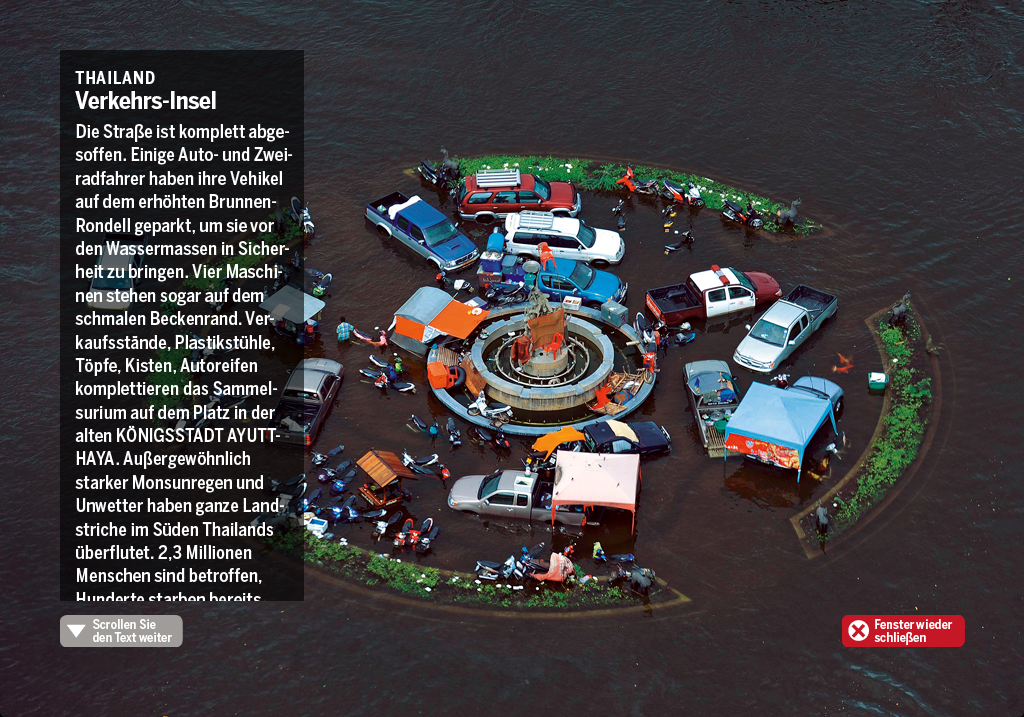 “Traffic island”, stern 19/2011
During the big floods in Thailand in 2011, cars are parked on a traffic island in Ayutthaya to save them from the water.
Photo: Christophe Archambault/AFP

“Snooker handmade”, stern 9/2012
Teenager in Tanzania are playing snooker. As they cannot afford a proper table, they just built one by their own.
Photo: Abaka Msuya 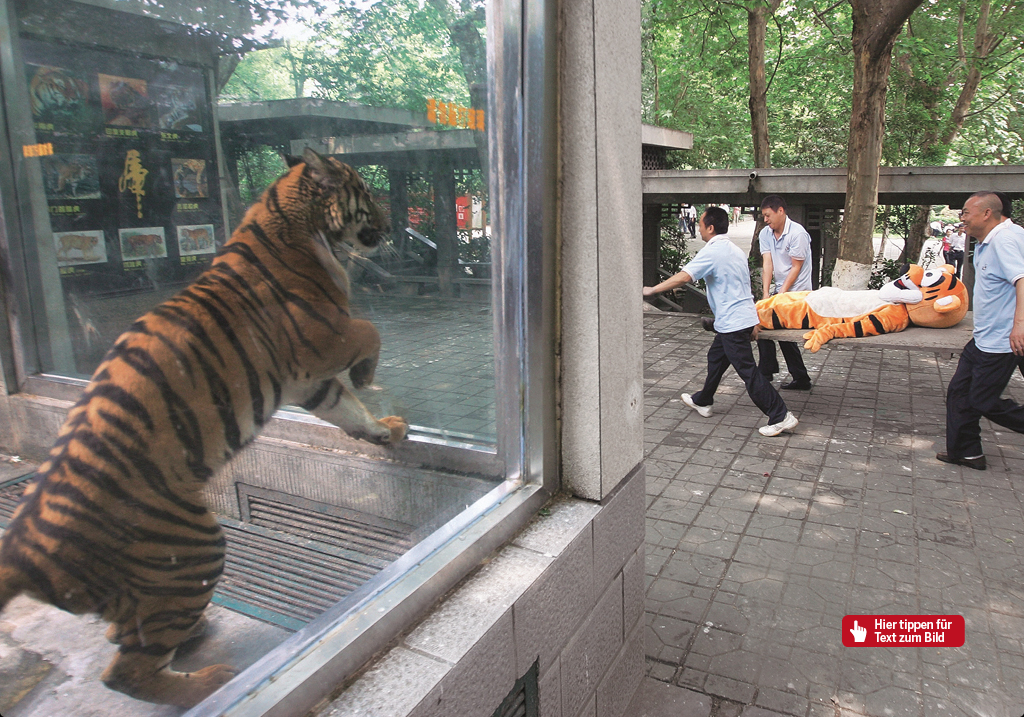